Hummingbird is a hiking trail that begins at the east end of Simi Valley. That’s Simi in the background of the picture.

The trail takes you up and to the east along a route just north of the 118 freeway. It rocks, and it has rocks, or as localHikes.com says, it has “some very interesting rock features including giant boulders, unusual caves, and various huge rock outcroppings.”

It is nearly impossible to convey the size of these rock groups from a single photo. After looking at 50 or so shots that I recently took, I thought it might be possible to give a better idea of it through a series of related pictures.

A short look back 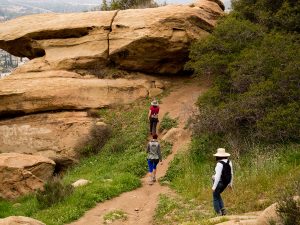 The series starts on our way back to Simi. We’re going to turn around under the split rock and take a look at where we’ve been. 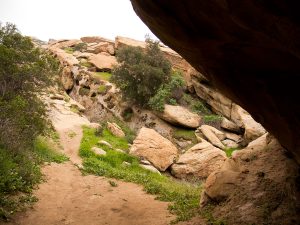 This is from under the split rock. From this starting point we’re going to go back up the trail. There is a large rock in the upper left that we’ll be focusing on. In this picture it looks like it’s against the tree on the left. There is a dark spot of shadow under it. 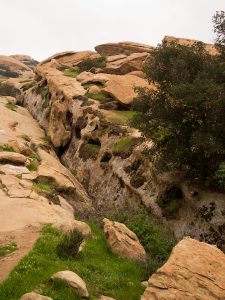 It’s easier to see the big rock in this photo, near the center left. Following the line, which is a crevice, to the upper left there is another small-ish rock that is the one that we really care about for getting a feel for the size of these things. 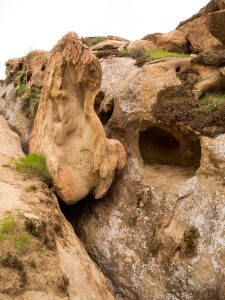 Here you can get some idea of the size of the larger rock. I wasn’t thinking about the small one when I took this shot. It’s located up the crevice, just out of view. 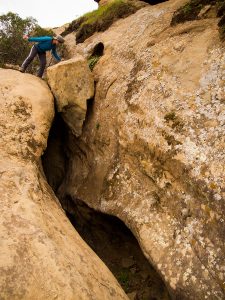 The size of the small rock is now obvious, as is an idea of the depth of the crevice. I had no idea about the size of the drop until I got there and looked straight down. It was dark enough that I couldn’t quite see the bottom. 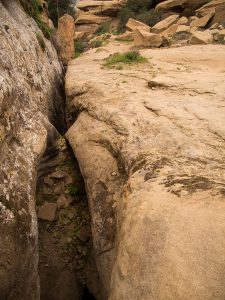 Finally, here is a view looking down from that small rock. That little rock wedge at the top of the picture is the big rock we’ve been following.

The bottom of the picture is looking straight down. I wasn’t willing to stretch any further out over the edge to get a better view, but it gets dark very quickly through another opening.