One thing leads to another. The story of this post. Start off simple:
1. Clean out emails. Get rid of a bunch of old stuff, but browse unread titles.
2. Find email with a link to “Guitar Player Vault” that has an old J.J. Cale interview.
3. Gotta read that. The article’s time frame: When Cale was asked about some of his favorite guitar players “today”, he refers to “this kid, uh, Peter Frampton”.
4a. There is also an interview with the highly under-appreciated Harvey Mandell.
4b. Learn that Mandell played the guitar solos on the Rolling Stone’s song “Hot Stuff”.
5a. Go to Mandell’s website. It looks like it hasn’t been updated for a while.
5b. Check the touring page in case it was updated. He is touring with Canned Heat, and has been for a while.
5c. They’re playing at Simi Cajun & Blues Festival this year.
6. Put SCBF on my calendar.
7. Play some vinyl from Harvey Mandell. “The Snake” or “Shangrenade”?
8a. See an ad for the Tapco 6200 mixer. I had one.
8b. Do a screen capture of the page with the ad.
8c. Paste it into the image editor.
8d. Edit the photo: crop, fix the corner. Add a border
9a. Remember that I got the mixer about the same time I learned about Mandell.
9b. Remember that I somehow made a mix tape using that mono-mixer, two turntables and moving the 4 volume controls needed to do the fading.
10. Decide to write this. Make notes. Need an image to post it.
11a. Collect images for the post.
11b. Combine and save the image.
12. Check if latest files were uploaded to website.
13a. Title the post. Who was that song by? Look it up: The Fixx.
13b. Add it to the post.
13c. Stop it! It’s becoming self referential and I’ll never be able to finish going down that road!
14. Post upload and make it too late to add anything to this by doing so.

And that’s how the day flies by! 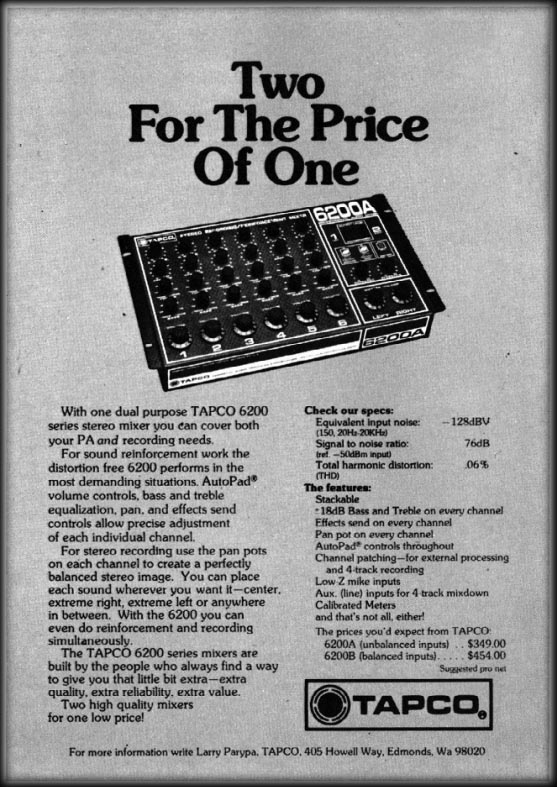